American singer Lizzo’s hit song “About Damn Time” has been playing on repeat on my phone, and in TikTok videos —and in my mind. The beat is catchy, but it’s the lyrics that hook me. The song captures the essence of Lizzo – a young woman who owns her beauty and her struggles.

“My triggers are: rejection and inadequacy. But I love that I’m more emotionally honest lately. I love that I can use my sadness constructively in real time for gratitude.” ~ Lizzo

Lizzo has openly shared about her struggles with anxiety and depression in interviews and social media posts. She’s candid about the stereotypes of plus-sized women, and also talks regularly about believing in herself— and loving all parts of herself.

The music video for “About Damn Time” features Lizzo attending a “Stressed & Sexy” support group, dressed in gray sweats.  When the leader calls on her to share a poem about something that makes her feel stressed and sexy, she runs out of the room. When she is clear of the building, the music starts and her body surprises her by responding to the rhythm. As Lizzo “gets into her feelings” we see her let loose, dancing in a sexy blue sequined bodysuit, singing those catchy lyrics that hooked me.

I relate to Lizzo when it comes to anxiety. My first panic attack hit me in 2019. I was sitting at my desk on a Zoom call, smiling at the screen, when my heart started beating out of my chest. I truly wondered if I was having a heart attack. My Apple watch was even alerting me to my heart’s 128 bpm and the fact that I hadn’t moved in a specified period of time.

I covered my laptop’s camera and ran to the bathroom. I was in my head. BIG TIME! I was supposed to read a chapter from my manuscript aloud to the group, and I knew I was stressed about it, but I hadn’t thought  I was that stressed. Yes, it was a “sexy” scene I’d chosen to share, but this was a group of women—supportive women—so why was my body responding like they would judge me?

Another panic attack happened a few weeks later in a Zoom book club. This time, I wanted to give my opinion on the book, but my opinion was different than everybody else’s.  I’d given a differing opinion before in this particular group and received a response that felt “judgy,” to me, so this time I didn’t share. I even stopped attending the meetings.

I spoke with my doctor about these two occurrences at my yearly check-up. He said he could prescribe something that would take the edge off, like a glass of wine would do. I declined. I had always been in control of my own body – my own mind. I would figure this out. He said I could always call the office if I changed my mind and decided I wanted to try the medication.

I mulled those two panic attacks for a while, questioning why my body responded the way it did. I even linked the panic attacks to my writing, since they both occurred in writing-related settings.

This stalled my progress with my book. I was beset by fear that the book wouldn’t be good enough, and also the surprising and opposite fear of, “What if my book is really good …  national television talk show good?”

I look back now and recognize that those two panic attacks started the work I’ve been doing the last three years – this journey I’m on to learn to understand my feelings and my edges, and how to express myself even when I know judgement will come. Because the truth is, there will always be judgment. Even when you’re playing small someone always has an opinion. Their opinion.

I’m a huge fan of Brené Brown, a research professor, lecturer, author, and podcast host known for her research on shame, vulnerability, courage, and leadership. I partly credit her for the confidence it’s taken for me to climb outside of my people-pleasing, other-consumed mind and into a place of confidently being the fullest version of me.

Vulnerability is pivotal in Brené’s work, and she teaches that part of what makes a great leader is the courage to show up and be vulnerable. She also is well known for her teachings around shame, which she believes underscores all the reasons we play small in order to not be vulnerable.

After one of Brené’s pivotal Ted Talks about her shame and vulnerability research, she was ridiculed for her weight. Like Lizzo, Brené candidly talks about her struggles with judgement and shame and how her own experiences with the need to belong deepen her work.

Showing up and sharing means being seen – something I thought I wanted, but remaining invisible is so much easier because it protects me from the fear of not being good enough. Exposure to criticism, shame, and judgement are all part of the writing life.

We were all born with the need to belong. This need drives us consciously and subconsciously. Brené’s vulnerability research confirms this. She makes a case for the importance of belonging based on the negative impacts of shame and lack of connection.

We want to fit in, to be accepted. We want to be seen as, and feel as though we are smart, beautiful, talented, helpful, strong, and kind – or as close to perfect as possible. We want to stand out, but not as too strange or different, and definitely not as inadequate, flawed, or weak.

Yet, we are drawn to people who choose to be vulnerable and brave, individuals who decided to go all in and share their truest most beautiful and authentic selves, even with the risk of judgement.

The part of Brené’s vulnerability work that entices me the most is her research on the connection between being vulnerable and living a Wholehearted life. Wholehearted living, as she so eloquently puts it, is “facing uncertainty, exposure, and emotional risks, and knowing that I am enough.”

KNOWING that we are enough and facing the risk that someone else – with their own need to belong — might think differently, is how we keep moving toward our goals and the life we want to live.

Lizzo’s music video ends with the cast taking off “masks” and “skin” and “uniforms,” and dancing in their own sequined outfits. The camera cuts back to Lizzo, now back in that gray sweat suit, smiling, singing, standing in front of the “Stressed and Sexy” Support Group sign, before turning and pushing through the doors behind her to leave the building.

It’s about damn time we realize we are enough just as we are.

Have you missed a post in the Abundance Series? Here are the posts thus far:

Abundance is Found Within

Abundance is Found in Surrender

Abundance is Found in the Stories We Tell Ourselves

Abundance is Found in a Mostly Empty Four-Bedroom Farmhouse, the Title ‘Mom’, and Hope

Abundance is Embracing Who You Truly Are–An Exquisite Masterpiece

Abundance is Being in Cahoots with a Higher Power

Abundance is Listening to Yourself, Knowing What You Desire, and Giving Yourself What You Need 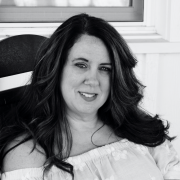 Christmas 2022! I’m grateful for time with all o

Help me wish my husband a Happy 50th Birthday! I w

My Mom & Dad made birthday dinner a special tradit

Today marks fifty trips around the sun, and I’m

Make the time. Do your thing. I’m committed to

I’m a huge @brenebrown fan. Huge! I love her boo

Tomorrow is November 1st, the start of NaNoWriMo (

Do you have a dream, a goal, a secret hope, a proj

What could be better than a beautiful fall day in

I see you with that painted-on smile and tears in

Lunch with these two smiling faces. Mom said it’

South Dakota, I will miss you and the brushstrokes